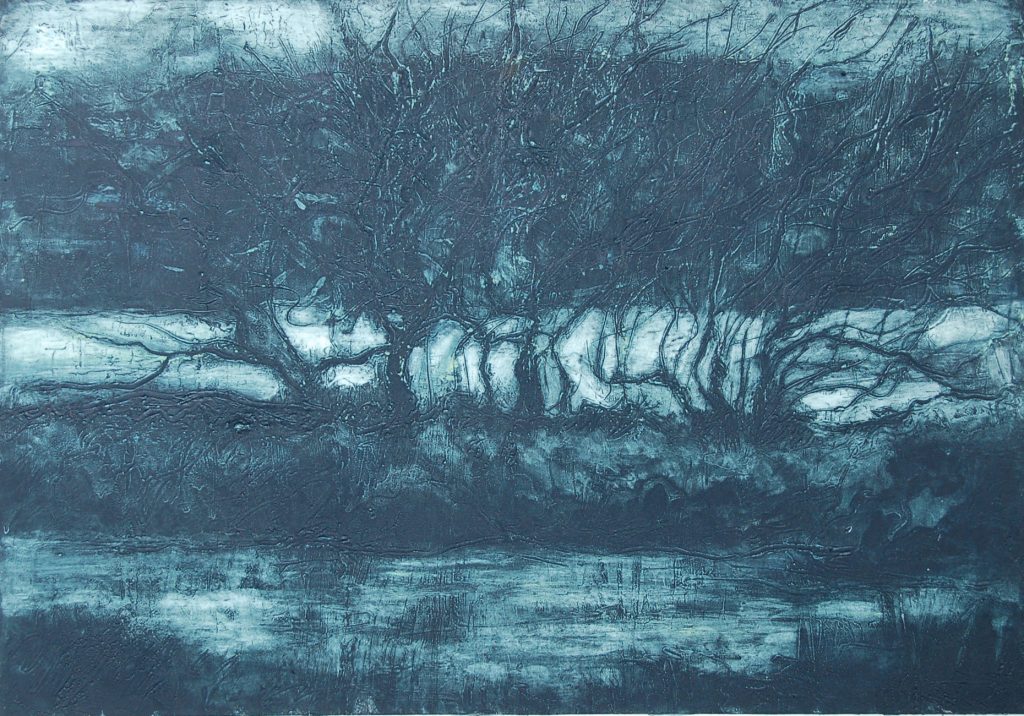 My starting points are often found on Dartmoor and the north Cornwall coastline. My images are contemplations on how our surroundings can reflect our histories, moods and thoughts. I specialise in etching, a medium that has been developed by artists for its own intrinsic qualities and is now often used to produce single images as individual as paintings.

My etchings almost look as if they have been eroded by the elements themselves. The metal plates have been scored, furrowed, scraped, burnished, re-scored and re-furrowed until their history is symbolic of the very subject confronting me. This tactile immediacy is of the essence and combines with the use of light and dark to create images of intense atmosphere. I sometimes apply etching principles to the medium of collagraph so that I can work on a larger scale to reflect my love of painting which continues to influence everything I do.

As a member of the South West Academy, the Plymouth Society of Artists and the 21 Group of Artists, I exhibit widely at key venues in the west country. I have been selected on many occasions to show work at the Royal West of England Academy and the National Print Shows at the Bankside Gallery, London.

Born in 1953 I moved to Devon with my parents in 1956. I left home to study art in 1975 and by 1984 had achieved an honours degree in Fine Art at the University of the West of England, and a PGCE and postgraduate diploma in Printmaking at Brighton University before moving back to Devon in 1988.

I have over 25 years’ experience of teaching printmaking having founded Tamar Print Workshop in 1992. I offer courses exploring a range of techniques and the studio, set in a beautiful position on the edge of Dartmoor, has become a vibrant hub for numerous local artists and printmakers. I enjoy the continuous exchange of ideas generated from this atmosphere and see my teaching as integral to my overall practice. 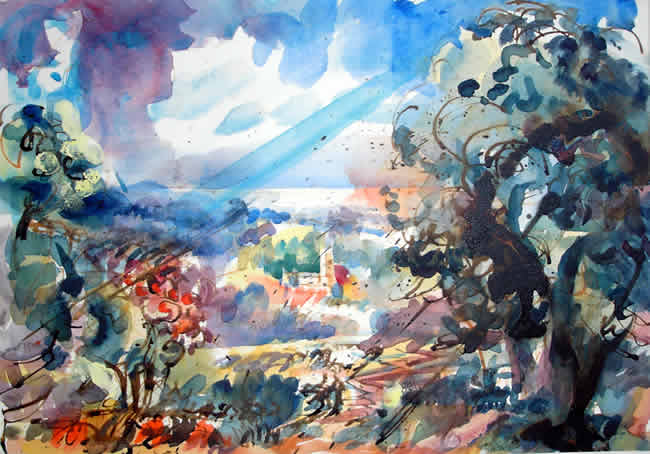 David Risk Kennard was born in England in 1953 and attended Marlborough College, where he flourished in the art school under the direction of Richard Shirley Smith, a wonderful wood engraver, artist and illustrator. Art history lectures were ‘fantastic’, he recalls. It was at Marlborough that he learned to draw and to indulge in refined imagery. From there, he went to Bower Ashton in Bristol, where drawing trees became his forte. He was, he says, somehow drawn to them and they to him.

David now lives in Dorset with his wife, Angelica. His home – the village of Powerstock – is well insulated from the outside world. Rolling hills fold in at every point, and sheep graze in the distance. David lives in a forest that he planted himself. Like Jean Giono’s Man Who Planted Trees, he has surrounded himself with his very own ‘friends’: tall walnut trees, Scots pines, hazels, a plum tree or two, cherries, a birch, a beech, a sycamore, an oak or three. His own piece of paradise.

David works in mythological time. There is a kind of magical realism such as is found in the novels of Giono: a heightened awareness of light and texture, as if the trees are speaking, as if the grain is yielding up its own inner landscape to his chisel. The figures grow of their own accord. The flanks of trees surround the walls of his studio. Pear, cherry, cedar, field maple, hawthorn. These landscapes have been scrumped. 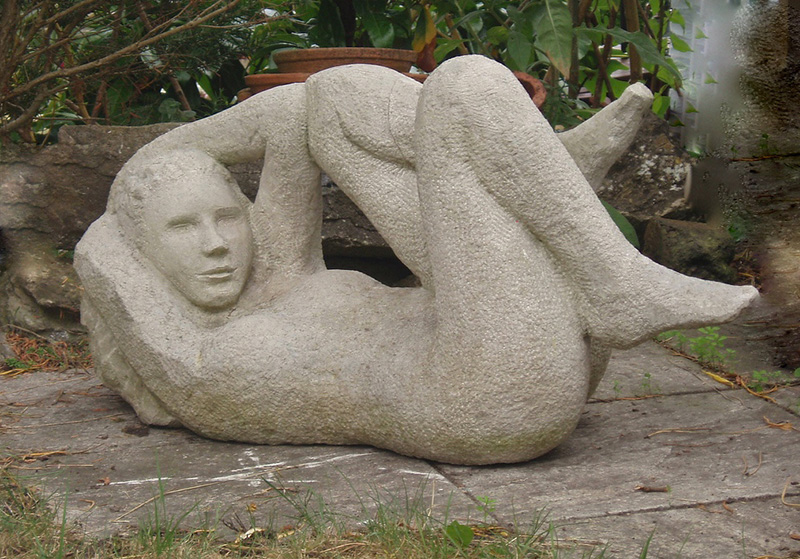 Stone is the material I have fallen in love with, however I enjoy using many other materials as well. There is something magical about hitting a piece of stone which is millions of years old with a hammer and chisel and finding the form you are looking for within it.

Sometimes the stone dictates what it wants to be and sometimes it is the other way round and it is me who dictates what I want from the stone.
All my work is carved by hand, I like to “feel my way” around the stone as I work.

The majority of my work is based on the human form, sometimes representational often abstract. I want to evoke a feeling of empathy or bonding with my sculpture, I want to convey emotions. My interest in the body stems from my early career as a radiographer, I am fascinated by the way shapes can blend seamlessly into one-another and sometimes end up with a form which is totally unexpected.

The tactile quality of a piece of work is important to me, I like my work to felt physically as well as emotionally.

I teach stone carving and wood carving as well as painting and mosaics. My passion lies with the materials themselves, how they relate and how an image can be coaxed out of them. 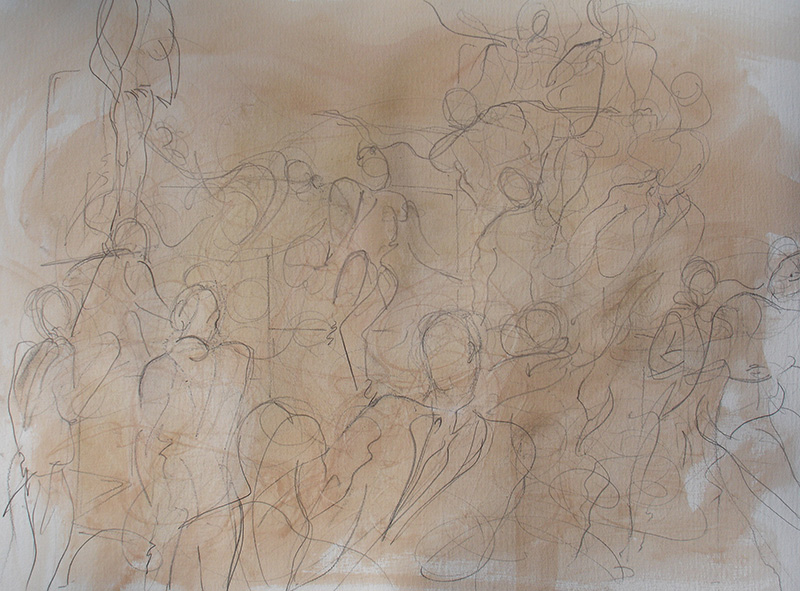 The study of the human figure has been a constant practice in Maggie’s career. However, her aim is to go beyond a mere representation of subject to one that reflects the intimacy of the naked body and a sense of mood & atmosphere. Her life drawing not only stands alone as a means of expression … Read more 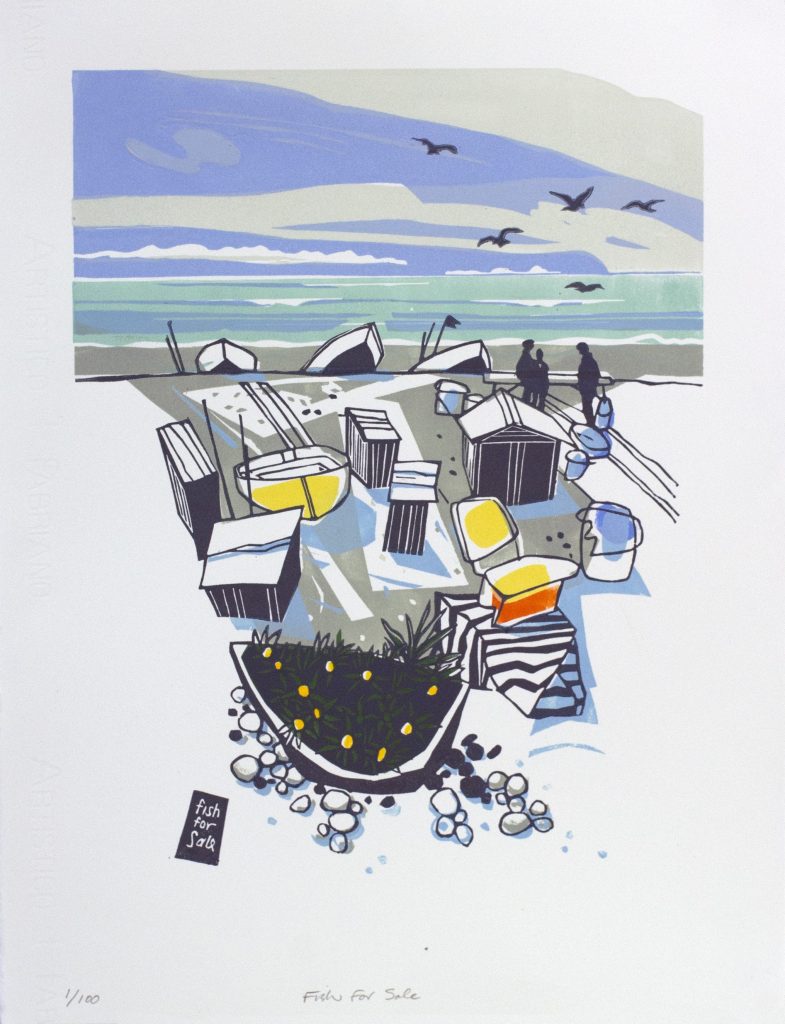 Colin Moore was born on the Clyde Coast of Scotland in 1949. He studied architecture in Glasgow, and following an international career in architecture and design, has worked mainly as a painter and printmaker since 2004. He has lived in Spain, Venezuela and London and currently lives in Dorset, England.

His book,”Propaganda Prints, art in the service of social and political change”, was published by Bloomsbury in August of 2010. 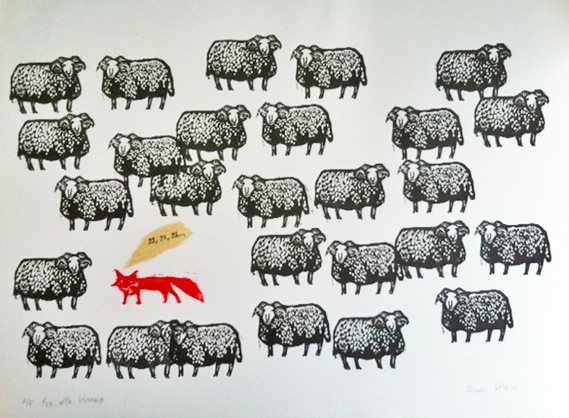 Jazmin is from Guadalajara, Mexico, where she studied graphic design and illustration. Years later she moved to Mexico City to study oil painting and printmaking. And years and years later she moved to London where she studied multimedia and where she established her work as an artist, printmaker, ceramist and continues to illustrate books. Currently Jazmin lives in the south of England.

She is a member of The Society of Wood Engravers, The West Country Potters Association and a teacher at the International Summer School Bild Werk-Frauenau, in charge of the wood engraving and letterpress workshop. Her prints have been selected twice for the National Print Exhibition and also twice for the Summer Exhibition in the Royal Academy of Arts. Her prints are in galleries around the UK.

She is inspired by the work of Jose Guadalupe Posada, the father of Mexican printmaking, and by Leopoldo Mendez who founded the Taller de la Grafica Popular, the celebrated organization which produced the posters and pamphlets that brought the Mexican Revolution to its illiterate masses, and created some of the finest graphic art of the 20th century.

But her real love is and always will be Saul Steinberg. 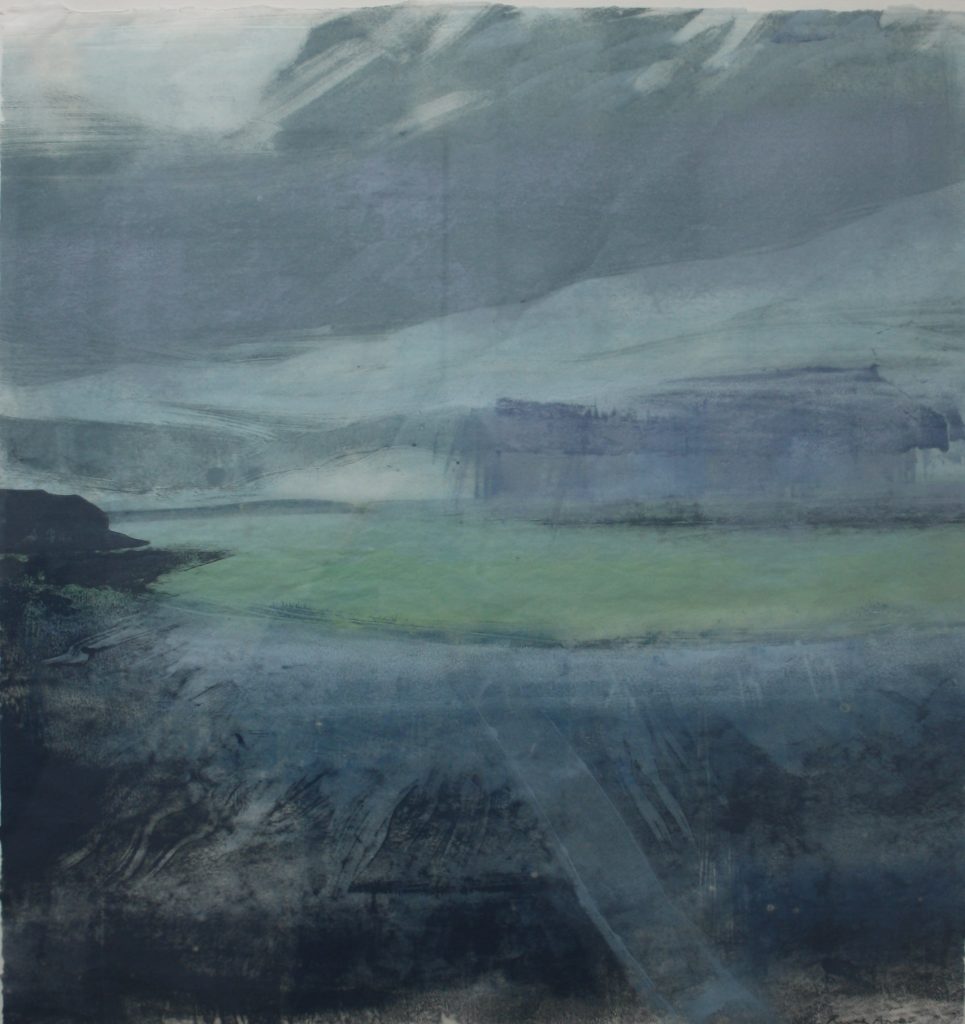 I am an artist and printmaker living in the South West of England. Water, light and vapour are the three elements that inspire my work.

My technique is perfectly suited to expressing these inspirations-delicate, translucent drifts of colour on fine tissue paper and traditional hand-made Japanese paper. Painted prints or printed paintings- the results are multi-layered impressions.

The prints are made by rolling ink onto a piece of glass or plastic, then taking an impression by hand. In this way layers of colour and texture are built up. Some layers are so delicate they appear breathed onto the paper, the finished effect of texture and translucency being something between an old Italian fresco, an English landscape painting and a Japanese woodblock print. 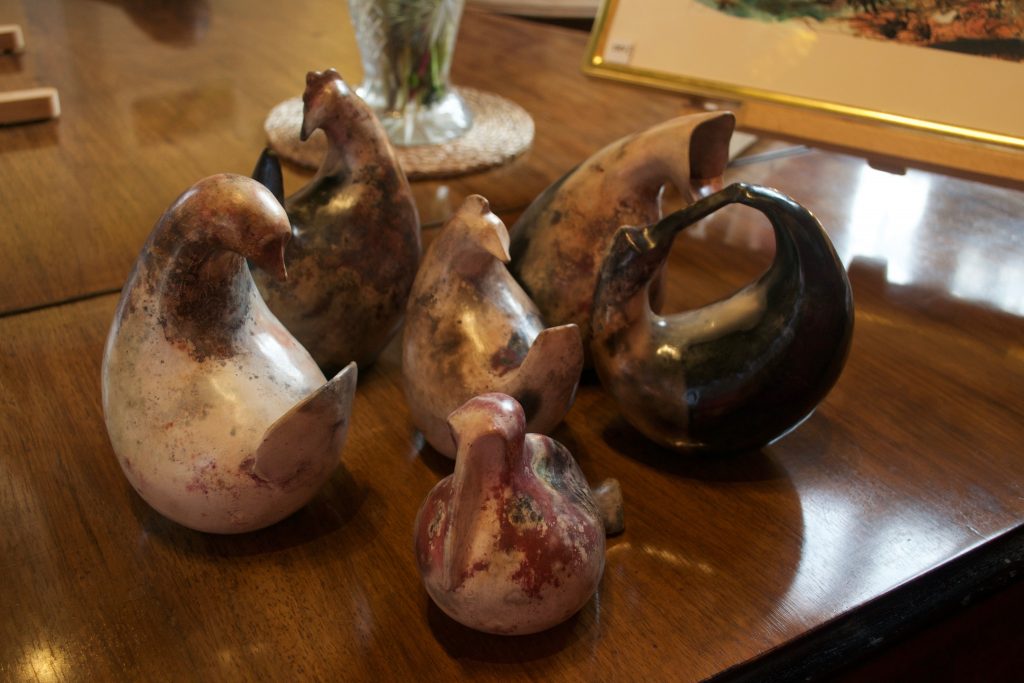 I first studied ceramics and subsequently sculpture at Kingston Polytechnic then theatre design at Wimbledon School of Art. After a career in films and television I reinvented myself as a garden designer. Now I have returned to my first love and find inspiration in organic and zoomorphic forms, especially the work of the Amlash potters living 6,000 years ago in Iran.

All my ‘morph’ pieces are handmade. They are formed with care and then burnished to a soft sheen before being subjected to fire and intense heat. I do not use glazes as I prefer the smoke and fire to infuse the pieces, blending with the stoneware clay to create strange and interesting colours, and making each unique.

My approach is very low tech and much of my work is done in a wood with sticks and a dustbin or a homemade wood burning kiln. 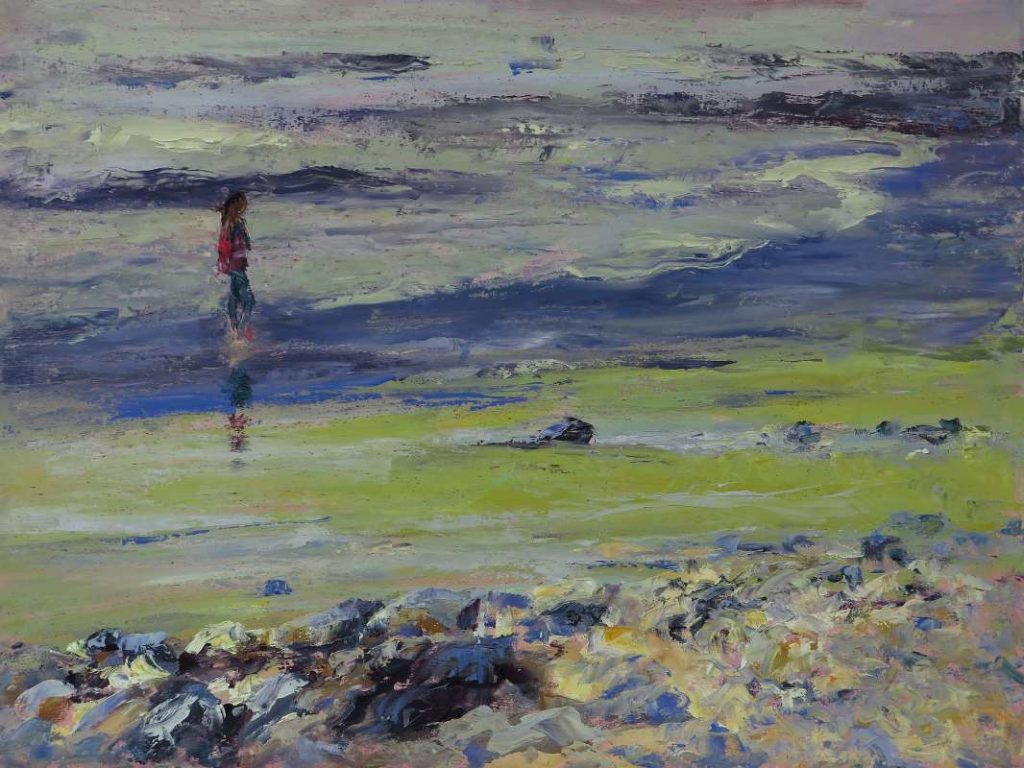 Christies’ Graduate, Philippa Headley is a full time independent artist based in the UK driven by passion to produce expressionist oil paintings as a response to her surroundings.
Her inspiration is found in the natural forces of the ever changing landscape. The initial emotional response to this landscape is captured with sketches and drawings which are then worked from back in her studio.

From initial plein air tonal study to finished painting, the process allows creativity to intervene at each step – whether selecting the colour palette to reflect first light at sunrise or darkening storming skies through to finalising compositional adjustments and surface textures. She has a diploma from the Royal Society of Arts.

Collectors :- Her collectors react to the evocative and atmospheric qualities of her artworks, which are in collections throughout Europe, Australia and America.
Some typical comments : “All our visitors have remarked on the dramatic quality of your paintings”, “We are so pleased with our second purchase it looks perfect above the fireplace”, “Beautiful original work with such a luminous quality”.
» Visit her website 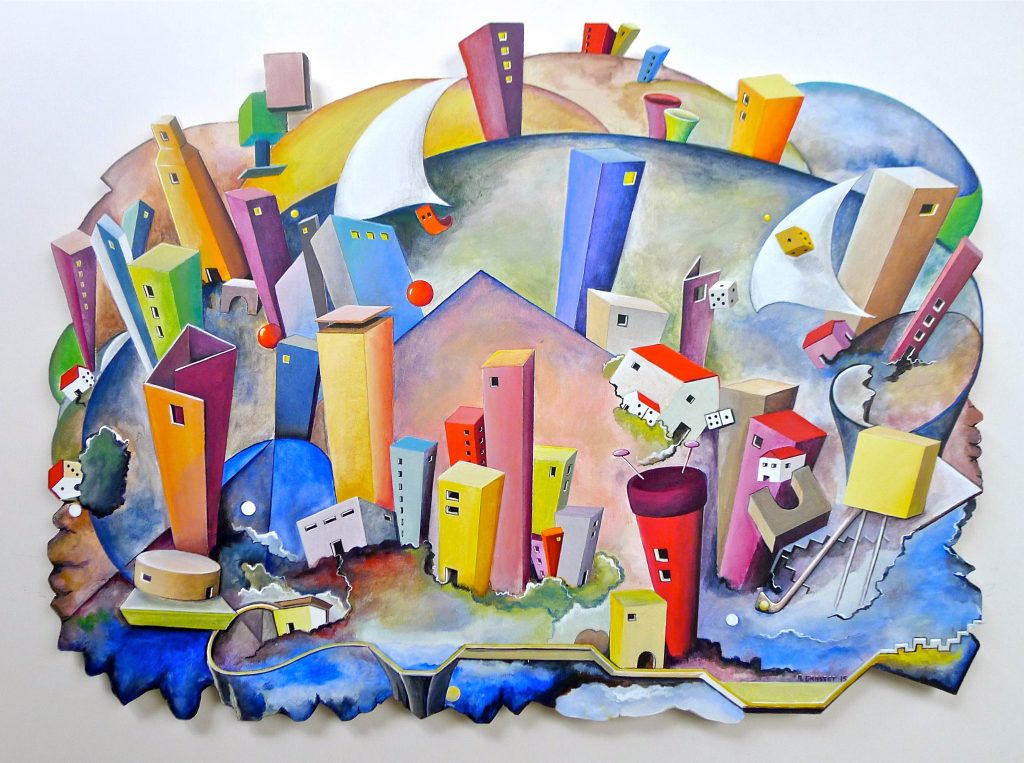 A native of France, Aude started painting professionally after a career at leading advertising agencies in New York and London. Over the years, her style has evolved from figurative to more surrealistic, using stunning 3D effects. The “Entropy” collection depicts feelings which revolve around the fragility and transience of life, the concept of impermanence and the constant transformation of matter into other matter.

Aude has exhibited at the Royal Academy Summer exhibition (2012) and been shortlisted in 2010 and 2013. She has shown her work at the Affordable Art Fair and at galleries in London, Paris, Beijing and Spain. She has been shortlisted for the ArtGemini prize in 2013 and 2004. Her picture shows her holding “Colonisation”; acrylic on cut board, resin, 2015; 59 x 39 cm